Add to your calendar

Link to the PhD thesis in DiVA.

Mitigation of climate change motivates researchers to explore hydrogen as a potential energy carrier. Unfortunately, widespread use of hydrogen as an energy carrier is limited by numerous challenges in its production, including high energy consumption; high economic cost; current reliance on rare metals such as platinum. Diiron hydrogenases could provide a solution to the above-mentioned challenges because they are able to turnover hydrogen at very high frequencies, and utilise earth abundant iron as the redox active centre. However, diiron hydrogenases are not currently a scalable technology, and more research is needed to fully understand their reaction mechanism, and to allow engineering of optimal proton reduction catalysts. The H-cluster is an hexanuclear iron cluster in the active site, which consists of a [Fe4S4]-cluster and a [Fe2S2] cofactor. The [Fe4S4]-cluster behaves as a redox active ligand for the [Fe2S2] cofactor. The [Fe2S2] cofactor is a diiron complex in which the irons share a bridging azadithiolato ligand, and one bridging carbonyl ligand. Each iron has one terminal carbonyl ligand and one cyanide ligand. The [Fe4S4]-cluster and [Fe2S2] cofactor are coupled via a bridging cysteine thiol. Several mechanisms for the diiron hydrogenase enzyme have been put forth, and are still debated. In parallel synthetic chemists continue to develop a diverse array of structural and functional mimics of the diiron hydrogenase active site. This thesis aims to examine several aspects of the H-cluster from a molecular design perspective, utilising FTIR, electrochemistry, EPR, XAS, among other spectroscopic techniques, to do so. Paper I studies the effects of the bridgehead ligand in the outer coordination sphere, and what effect this has on the oxygen tolerance and reduction chemistry. Papers II and III investigate the effect of tuning the electron density on the iron centres through the incorporation of a redox active ligand (paper II) or through introduction of capping Lewis acidic moieties on the cyanide ligands of the diiron cofactor (paper III). Paper III also reports on the potential role played by the Lewis acid in protecting the cyanide ligands from proton attack during catalysis. In paper IV a new synthetic mimic is synthesised in which the iron is replaced with manganese while the coordination environment remains intact. The results from these studies inform on future design perspectives for diiron hydrogenase active site mimics. 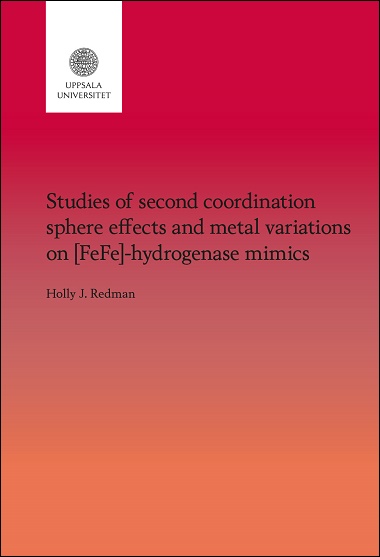